My nephew, Jeremiah, was born this morning and is in the NICU. He is a heart baby too, he has transposition of the great arteries (TGA) and a ventricular septal defect (VSD). To further complicate things, he has a congenital diaphragmatic hernia (CDH).

He was only expected to live two hours at best but surpassed the two-hour mark hours ago. We are praying for a miracle.

Jeremiah’s mom, Heidi, is recovering, but to read more information on his diagnosis pre-birth you can visit Heidi’s blog: Gibbering Madness.

My mom sent this update earlier this afternoon:

I just got back from University Hospital. Bryce got to Utah yesterday around 4 p.m., and by 8 p.m. Heidi was in labor. They went to the hospital around 3 a.m., and Jeremiah was born at 4:20 a.m. by C-section. He weighs 7 lb 1 oz and has quite a bit of shimmery light brown hair—that looks curly.

He is in the NICU and has already lived four times longer than they had been told to anticipate. The doctors there are so good at communicating with Bryce. They have spent most of this time trying to get the carbon dioxide out of Jeremiah. It can be as huge of a problem as too little oxygen can. His carbon dioxide numbers have been going down all morning—which is what they’ve been hoping would happen. At one point they were going to use a surfactant to try to get his lungs to “unstickify” and open up more, but when we left, they had decided not to do the surfactant.  They didn’t want to run the risk of making a hole in his lung with too much pressure if they didn’t have to do it.  They have two pulse ox machines going on Jeremiah that report his oxygenation both at the feet and at the top of his body. He is generally around 70% which is good considering his heart has the pulmony artery and the aorta connected opposite of where they should be. He has a large hole between left and right—which is usually problematic. In Jeremiah’s case, it is helping his blood to mix and making it possible for a little more oxygenated blood to get pumped out.  They have Jeremiah being cooled to help prevent brain damage—and maybe other reasons, too. His intubation took 10 minutes, so there is a possibility of brain damage. The doctors said he responded very quickly once they got the tubes in, and they thought with the cooling, his brain might be OK.

I know I was introduced to lots of doctors in the NICU, but I remember no names or titles. Bigwig doc from Primary Children’s was there observing Jeremiah. He was working with Jeremiah’s two in-the-room doctors. They would explain every move to Bryce—who didn’t leave unless they asked him to (during shift change and reports). Bigwig doc was going to call bigwig heart surgeon to discuss the possibility of doing heart surgery today and getting Jeremiah onto ECMO after the surgery. That was never offered as a remote possibility prior to today, so even that possibility is nice to cling to. He still might not make it, but there is that remote chance.  Oh, and by the way, his feet are just fine—not clubbed as they had been told they were. Miracles do happen.

Greg took a couple of pics on his new cell phone while we were at the hospital. I will get Danica to email them to me and I’ll include them here.

Heidi’s Mom has been in California helping with another grandbaby that was born. She hopped onto an earlier flight and should be back in town by 1:30 this afternoon.

As we were leaving the hospital around 11 a.m., Heidi was begging to get up and go see her baby. They had taken her there once in her hospital bed on the way to her room. Her feeling has now returned to her feet, and she thought they might let her go spent 5 minutes or so in NICU. I hope they did.

Heidi and Bryce are both exhausted, so texting or email would probably be the kindest way to communicate with them.  Heidi is in room 2305 at University Hospital. I would guess she’ll be there for 3-5 days, so that lets me know that I’m going to be running back and forth with Isaiah whenever possible.

Thank you to all of you who have been praying for our family! 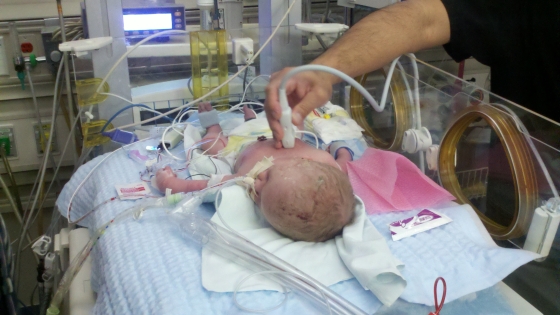